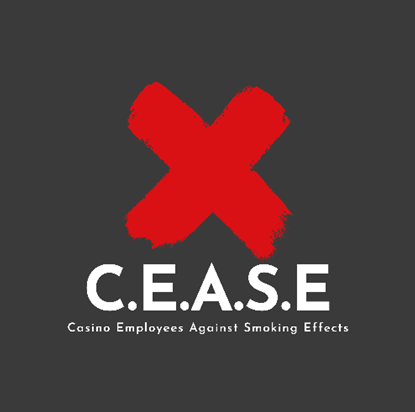 Trenton, NJ— As the New Jersey legislature is set to consider S264 and A2151, legislation to close the casino smoking loophole, nearly one hundred Atlantic City casino workers and supporters from Casino Employees Against Smoking’s Effects (CEASE) joined for a summer outing at a Trenton Thunder baseball game on Wednesday evening. Noting their support for the legislation and for AC casino workers, CEASE invited prime sponsor of the bill State Senator Shirley Turner, who represents Trenton, and co-sponsor State Senator Vincent Polistina, who represents Atlantic City, to join the event and throw out the first pitch at the game.

“While we’re out here enjoying time with our colleagues and families, we are mindful that it has been over 400 days since smoking returned to Atlantic City casinos and we are again being forced to breathe secondhand smoke during our shifts,” said Pete Naccarelli, co-leader of CEASE. “We thank our supporters and especially Senators Turner and Polistina for joining us in this fight. Our bills to get rid of smoking inside the casinos have earned more bipartisan cosponsors than just about any other bill currently under consideration and we will not let state lawmakers off the hook this fall. We’re calling on our leaders in Trenton to bring these bills for a vote as soon as possible and finally get this over the finish line.”

With lawmakers preparing to return to Trenton for their legislative session, casino workers and advocates for smokefree casinos are making clear that no worker should be subjected to breathing secondhand smoke. A2151 and S264, bills to close the casino smoking loophole and get rid of smoking inside Atlantic City casinos have earned extraordinary bipartisan support in both chambers of the state house. The legislation is cosponsored by more than half of the legislature, including the entire Atlantic City delegation, a majority of health committee members and a majority of South Jersey Assembly Democrats.

Last week, CEASE co-leaders sent a letter to the newly appointed president of the Casino Association of New Jersey, calling on the industry to finally stand down and abandon their opposition to making Atlantic City casinos smokefree indoors.

Casino Employees Against Smoking’s (Harmful) Effects (CEASE) is a group of thousands of casino dealers and other frontline gaming workers that formed after indoor smoking returned on July 4th and is fighting to permanently remove smoking from our workplaces.